It’s been raining for days, absolute happiness for me living as I do in Málaga, a place where the rainy season is often missing, and perfect for a cooking day in the countryside. The orchard is soaked, and the chards look shinny and crunchy, ready to be part of a quite simple and delicious Easter dish, coming in a couple of weeks. 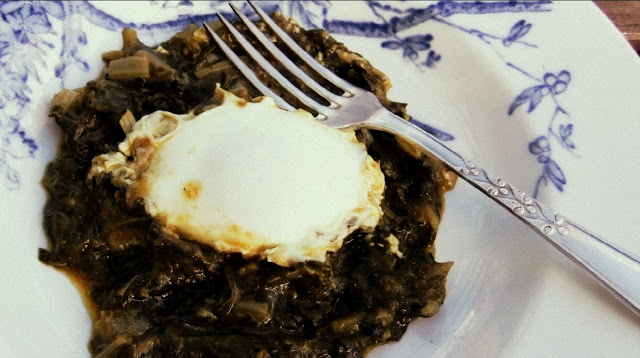 Being the name of this dish “Porrilla de acelgas”, my mother always called it just “Spinach”, though she has always used chards to prepare it, and it’s always been for me “chards in yellow sauce”. She used to add, and still does, food colouring to get a more tempting appearance, and the fact is that I love chards since I was a kid, maybe the secret was that intense yellow… But since I don’t use the colouring, I add turmeric.

Rinse and chop the chards, and steam them for about 10 minutes.

In the meantime peel the garlic cloves, pour some olive oil over a frying pan and fry them along with the slice of bread. Once they brown, transfer to the blender bowl, adding 1 tbsp of vinegar and a cup the chards cooking liquid, blend it all and set aside.

Place over medium heat the frying pan with the olive oil used before and sauté the chards, adding ½ tbsp of paprika, a pinch of cumin, stirring, and then quickly pouring the blend. Season with salt and pepper and let it cook until most of the liquid is absorbed.

The final touch, if you like it, is cracking one egg per person over the chards while the sauce is reducing.

By continuing to use the site, you agree to the use of cookies. more information